During  a BBQ, a friend stumbled and took a little fall - she assured everyone that  she was fine (they offered to call paramedics) and just tripped over a brick  because of her new shoes. They got her cleaned up and got her a new plate of  food - while she appeared a bit shaken up, Ingrid went about enjoying  herself the rest of the evening. Ingrid's husband called later telling  everyone that his wife had been taken to the hospital - (at 6:00pm , Ingrid  passed away.) She had suffered a stroke at the BBQ. Had they known how to  identify the signs of a stroke, perhaps Ingrid would be with us today. Some  don't die. They end up in a helpless, hopeless condition instead. It only  takes a minute to read this... 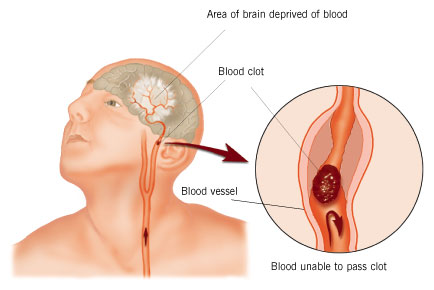 A neurologist says that if he can get to a stroke victim within 3 hours he can totally reverse the effects of a stroke. He said the trick was getting a stroke recognized, diagnosed, and then getting the patient  medically cared for within 3 hours, which is tough.

RECOGNIZING  A STROKE
Thank God for the sense to remember the "3" steps,  STaR.  Read and Learn! Sometimes symptoms of a stroke are difficult to identify. Unfortunately, the lack of awareness spells disaster. The stroke victim may suffer severe brain damage when people nearby fail to recognize the symptoms of a stroke.

NOTE: Another 'sign' of a stroke is this: Ask the person to 'stick' out their  tongue. If the tongue is 'crooked', if it goes to one side or the other that is also an indication of a stroke.

Other signs of stroke are:

If he or she has trouble with ANY ONE of these tasks,  call 111  immediately!!  and  describe the symptoms to the dispatcher.

Below is the origination of this technique:

Just a minute: Bystanders may identify stroke symptoms in 60 seconds

The test, which takes less than one minute, has helped healthcare professionals accurately identify stroke patients.   If bystanders can relay results of this test to an emergency dispatcher, it could speed treatment to stroke patients.  Time is crucial in treating stroke.

A clot-busting drug has been shown to limit disability from strokes cause by clots (ischemic strokes), but the drug must be given within three hours of the onset of stroke symptoms.  Because of this short time window, only a small percentage of patients are eligible to receive the drug.

ìAs the brain is deprived of oxygen during a stroke, itís literally starving minute-by-minute.  The sooner the patient receives proper treatment in the appropriate medical setting, the better the chances for a full recovery,î says Amy S. Hurwitz, a second-year medical student at the University of North Carolina-Chapel Hill School of Medicine in Chapel Hill, N.C.

Hurwitz is the lead author on a study designed by Jane H. Brice, M.D., assistant professor of emergency medicine at the same institution.  The study examines whether members of the public can effectively administer the simple three-item examination that healthcare professionals use.  It is  known as the Cincinnati Prehospital Stroke Scale (CPSS).

Researchers modified the CPSS into a script for over-the-phone administration via a layperson intermediary.  They recruited stroke survivors from the hospitalís support group.  Some of these volunteers still had one, two or three of the unresolved symptoms identified from a previous stroke, such as facial weakness, arm weakness and/or speech deficits.

Researchers then recruited 100 non-patient visitors (bystanders) to the UNC hospitalís emergency department and brought the people to a quiet room where a stroke survivor and investigator were waiting.  The bystanders were instructed to ìanswer the telephone when it ringsî and to follow the directions given over the phone, using the stroke survivor as their mock patient.  A researcher role-played a dispatcher implementing the CPSS script.

ìWhile treating stroke patients may require extensive training and expensive equipment, our study shows that untrained adults can successfully detect stroke symptoms.  This ability can allow a bystander to act as ëeyes and earsí for a 9-1-1 dispatcher who may be miles away,î Hurwitz says.  ìUnlike other investigations that strive to improve the treatment of stroke within the hospital setting, this study taps into the general public as a first-line resource in the diagnosis and triage of possible stroke victims.î

The bystanders in the study scored high when detecting arm weakness and slurred speech ñ two key symptoms suggesting a patient may have had a stroke.  They were less successful detecting facial weakness, probably because itís hard to assess a strangerís smile, according to Hurwitz.  If the possible stroke patient was the bystanderís spouse, itís likely the bystander would more readily detect an abrupt change in the quality of the smile, she says.

Delaying medical attention is dangerous when someone is having a stroke, since continued oxygen deprivation can cause brain damage.  ìAs the medical profession strives to improve the diagnosis and treatment of stroke, so should the general public aim to access this medical attention as quickly as possible,î she says.

Hurwitz says the next step is to test layperson administration of the test in the field with real patients and emergency dispatchers.  ìWe will train dispatchers to lead callers through the CPSS assessment of the stroke victim.  We will then compare the survival and symptom outcomes of patients who are screened with the CPSS with a subset of patients who do not receive the screening.  By statistically comparing the patient outcomes Ö we can assess whether the addition of the CPSS to the dispatcherís repertoire would benefit future stroke victims and their families,î she says.

Co-authors of the study are Barbara A. Overby, R.N., and Kelly R. Evenson, Ph.D.  The study was partly funded by the American Stroke Association and the UNC Medical Alumni Foundation.